“It was only about a kilo a year. But over 15 years, that added up to 15kg!” says Angela. “Around my fiftieth birthday I imagined what it would be like ten years from now at sixty. I didn’t want to be struggling to get out of the car or tie my shoes.”

It was looking at her recent wedding photos to her partner of 14 years that Angela unequivocally decided it was time to make some healthy lifestyle changes. 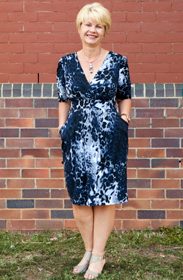 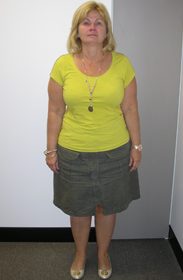 “I was devastated when I saw my wedding photos,” explains Angela. “On the day I thought I looked lovely, but when I saw the photos all I could think was how overweight I looked. I remember thinking, I look so much older than 50.”

After a six week holiday overseas, Angela became more disheartened when she put on a further 5kg which she tried to lose by herself when she returned.

“I was always someone who tried quick-fixes and crash diets; which of course never worked long term. I’ve seen and tried every program under the sun. I may have lost some weight initially but I would quickly put it back on and then some,” admits Angela.

Working in the industry, Angela had heard a lot about the LifeShape Clinic and knew it was a program doctors actively referred their patients to. She made a call to the clinic and got an appointment for an Initial Assessment straight away.

“My Dietitian was lovely; I developed a real connection with her. My Exercise Physiologist and Psychologist were great too. What worked for me was the different types of support the clinic offers. Even the Client Service Staff are amazing.” says Angela. “There’s a whole team of people working with you, supporting you.”

Initially Angela doubted her ability to do well on the program but she saw great results in just a few short weeks on her Lifeshape 6 program.

“Seeing how well I was doing encouraged me. I decided I would surrender myself and do whatever they told me to do. I let go of what I thought I knew about weight loss,” explains Angela. “I had failed so many times in the past, that this time, I decided to not tell anyone I was even doing the program. When I did tell people, they were very supportive, but all in all, this was my journey. I needed to process it myself. But my family were great.”

Angela’s been a great inspiration to other members of her family, such as her husband who’s also lost 7kg^ simply by adopting Angela’s healthy outlook on eating and exercise.

“I can’t believe how much energy I have now!” exclaims Angela. “I was always tired, sluggish and sad before.  Everything was an effort and I think I was suffering from a little depression. At one stage I was considering requesting some additional Psychology sessions for my program because I was very emotional all the time. But since becoming more active, my depression is gone! Walking really just clears my head completely.” 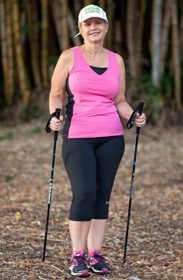 After her LifeShape 6 Angela is 12.5kg^ lighter, has lost 21% body fat^ and is now training to take part with her family in the 100km Oxfam Trailwalk event in June – something she never would have considered just a few short months ago. The Oxfam Trailwalk is not for the faint hearted. The 100km trek spans from Mt Glorious to Mt Cootha and requires participants to walk through the night to complete the trail in 48 hours.

“I was feeling anxious about coming to the end of my LifeShape program. I was worried I would have no real goal to work towards anymore,” explains Angela. “I heard about the event and chatted to my Dietitian and Exercise Physiologist about it. I wasn’t sure I was capable of doing it and I didn’t want to fail. But they were both very supportive and said there was no reason I couldn’t, or shouldn’t. They both thought it would be a great achievement.”

As well as being more active, Angela’s also learnt so many useful tools to help her in all areas of her life.

“With my Dietitian, I identified my danger time is late afternoon and also the hours before bed. If I don’t keep busy I start thinking about snacking,” says Angela. “Now I crochet! I make myself crochet a granny square, which takes about an hour, before reassessing if I actually need a snack or not.”

“My husband and I have worked on cutting out processed foods and love experimenting with cooking,” explains Angela. “It’s the little things like utilising herbs and lemon in a salad instead of a store-bought dressing. On Sundays I have a big cooking day and I also cut up vegies for the coming week so I have snacks stored in the fridge to have with hummus when I get home from work.”

Looking back, Angela reflects on her journey during the LifeShape Program. 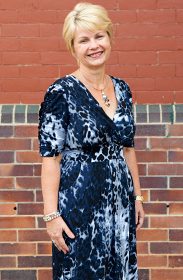 “I’m not going to say it was easy, but it certainly was nowhere near as hard as I thought it would be,” confesses Angela. “The bottom line is it worked! My perception at the beginning was that it was expensive. But now I’ve been through it, I know it’s worth every cent. It was also great to get some of it back through my Private Health cover.”

Now officially finished her core LifeShape program, Angela’s opted to sign up to a Support program so she can touch base with her team every few months.

“I’m feeling sad it’s the end of my core program,” says Angela. “I’m confident I won’t fall off the wagon but just knowing I have those extra consultations scheduled in helps. I know they are just a quick call away - but I’ll miss checking in once a week!”

If Angela could say anything to those on the fence about joining?

“Absolutely do it! You won’t regret it,” implores Angela. “In one word? Surrender. Surrender to the program and do everything they ask. I had tried every diet program on the market and been trying to lose the weight for 20 years. Don’t just focus on the weight you want to lose, think about what you want to gain.”

Results may vary. To find out what you can achieve on your LifeShape Program book a no obligation initial assessment with one of our Dietitians, call 1800 567 348. Alternatively you can register your interest online.

Fill in your details below and our team will be in contact shortly to answer your questions and get you started.

How we're responding to COVID-19...
Find out more>
Our Disclaimer: All client testimonials are genuine accounts of experiences on the LifeShape program. Due to the personalised nature of the LifeShape program, results may vary based on an individual’s compliance, motivation and personal history.
© 2022 Lifeshape Health Pty Ltd.Privacy Policy
CLICK TO CALL
Information for doctorsBook an assessmentOnline shop

could save your life.

Being overweight is a precurser to heart disease and a DEXA Scan is the perfect starting point to get a picture of your belly fat, and your health risk.